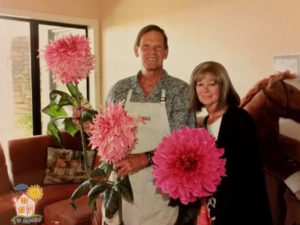 Marilyn and Ken
with some mighty big dahlias

Marilyn Masurat passed away late December 2018.  Her health challenges had been significant the past couple of years and during the last few months she was cared for by family and caregivers that were very amazing.

Marilyn, along with her husband Ken, have been involved in the west coast dahlia world for a long time.  They were the driving force of the John Stowell Dahlia Society in San Jose and were very involved in American Dahlia Society activities.  Marliyn was a key leader for the site review, negotiation and management of the 2002 National show and then again contributed in a similar significant way to the 2011 National Show.   Some of you may remember visiting the Masurat dahlia garden as a part of the 2011 National show activities.

The PSW Dahlia Conference annual meetings were regularly hosted at the Beverly Heritage Hotel in Milpitas, CA (Bay Area) which Marilyn managed.  She had a special ability to anticipate needs and to provide for her guests way beyond expectations.  She was a great friend to many of us and a person of hospitality to all.

Last April, Marilyn was able to attend the group dinner as a part of the ADS planning meeting held in Northern California at the same hotel (now under new ownership and having a new name).  Many of us were glad to have that opportunity to visit with her.  We will fondly remember her contributions to ADS and the west coast dahlia world and her friendship.