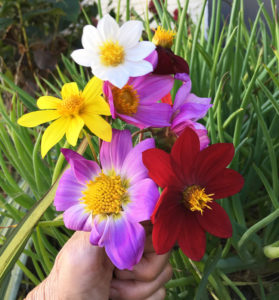 Bouquet of species dahlias grown from seeds collected in Mexico as part of the Genome Project.

In 2016 Dr. Virginia Walbot of Stanford University and Kristine Albrecht of ADS started the ADS Genome Project based on Dr. Walbot’s inspiration. Dr. Walbot worked pro bono to see this project though Phase One.
Species dahlia seeds were collected in their native habitat in Mexico and grown by ADS volunteers and at Stanford University.  Leaves from 15 species dahlias and 11 modern dahlia varieties were analyzed with RNA sequencing. The surprising result: modern and species dahlias are genetically indistinguishable. This suggests that, rather than multiple genetic lines, modern and species dahlias spring from one common gene pool, similar to what we know about dogs: one common gene pool with wide variation in characteristics.
The ADS Genome Project has a new home at the Harkess Laboratory at Auburn University and HudsonAlpha in Alabama. In Phase Two, with PhD student Zach Meharg doing the lion’s share of the work, ADS has finished a long read sequencing of the modern dahlia ‘Edna C’, which was completed in January 2023. The genome will now be assembled. It’s like putting a puzzle together with lots of pieces (and extra ones that don’t fit) and with no puzzle picture to guide the scientists. Fortunately there is software called High-C to aid genome assembly.
When complete, this will be the first dahlia genome assembly. The PhD student will also resolve the dahlia family tree utilizing high quality DNA samples from 36 currently identified species. This data should clarify species relationships and identify the progenitors or parents of ‘Edna C’. He is also planning a similar sequencing strategy for 600 leaf samples taken from a recent ADS National Show in Ohio to start developing an atlas of phenotypes (dahlia traits like form, color, growth habit, stem length etc.).
The benefit to the dahlia community of having the dahlia genome sequenced is that a genome road map will ensure future scientists study the dahlia and their work will produce more precise and faster results.