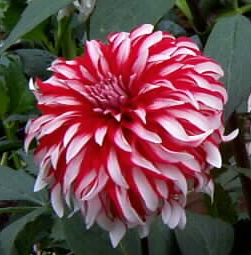 A general description follows, which expresses what Ernest Pitt in the 1983 NDS Annual states about the dahlia as a garden flower. Barry Jordan, a member of the National Dahlia Society, comments further about what constitutes a superior garden dahlia. In addition, we have added additional comments. It is clear for such a task that a general, loosely framed description of garden dahlias that will accommodate those who grow dahlias for their own personal enjoyment will provide focus to the meaning of what I have termed, garden dahlias.

The ideal garden dahlia blooms early, maintains its vigor for the season’s duration, and provides an array of blooms from its first bloom until frost; these prerequisites rule out those varieties that bloom in distinct flushes and then become less prolific as the season progresses. They must branch freely, providing an abundance of blooms. Usually, smaller dahlias, 6 inches and under, bloom sooner and are consequently better suited as cut flowers. Since some smaller varieties do bloom somewhat sparsely, though, these will never perform well as a garden variety, yet may perform well as an exhibitions dahlia. Regardless, the garden dahlia should hold its bloom nicely above the bush on a relatively straight stem, having a reasonable length of stem for cutting. 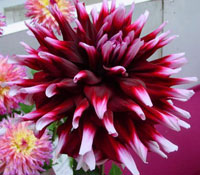 Unlike an exhibitor, the person who grows dahlias for garden decoration only is not as concerned with whether the depth of the flower is at least two-thirds of the diameter or whether the petals are necessarily arranged like the precision of tiles on a roof. In fact, a little informality in petal formation may add to one’s enjoyment in a garden setting.

For average dahlia garden enthusiasts, they appreciate a dahlia’s range of color more than any other single factor. They enjoy the darkest of reds and purples to the brightest of yellows and whites. Without doubt, though, they appreciate multiple colored dahlias the most. They purchase bicolored dahlias that are tipped with a different color than the rest of the petal; they especially enjoy blends with merging and contrasting colors, and they favor two or three toned blended blooms as well as unevenly blended varieties. For the garden dahlia lover these fascinating color combinations are the dahlias’ big attraction. 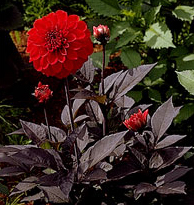 Other characteristics, such as foliage also appeal to them. Dahlias with dark foliage, such as FIRE MOUNTAIN either nearly black or dark green, a good bush habit in addition to the other color attributes listed above are definite premiums. An ample supply of tubers that keep well for these gardeners is also desirable. After all, in future years they will again want to enjoy their favorite varieties and share them with others.

One should not err by thinking, however, that top ranking exhibition varieties will not necessarily make superior garden plants. Many varieties exist that function well both in the garden and on the show bench. That is one of the great strengths of dahlias; there are varieties available to suit all purposes.