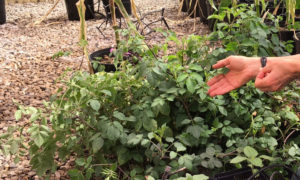 D. coccinea growing in the greenhouse at Stanford U

What is genome sequencing?

A laboratory process that determines the complete set of genes or genetic material in a cell or organism.

How does gene sequencing work?

Sequencing the dahlia genome would provide a road map of the locations and “composition” of all its genes. In lay terms it’s like having a road map for a trip from San Francisco to New York. Without the map, researchers don’t know what roads lead to the result they are seeking. With genome sequencing, scientists could determine what genes have changed (evolved) and could explain how various floral forms came to be. Genome sequencing also allows comparison among species. For example, dahlias are a composite, like a sunflower. After sequencing, scientists could determine what genes are common to both sunflowers and dahlias. They could also identify genes that are novel in dahlias.

If the genome is sequenced, what are some long term and short term projects that scientists might undertake?

Comparing dahlia DNA to other flower species would interest scientists that study flower and plant evolution. Longer term projects could involve building tools for breeders. Long term researchers could use the dahlia genome to determine why some varieties are more resistant to virus or pest pressure.  They could also determine how to create new dahlia colors and forms.

Are there any examples of other cultivars that have had their genomes sequenced? After sequencing what research resulted for those cultivars?

There are thousands of sequenced flowers and vegetables. Work on corn, for example, has allowed scientists to pinpoint precisely which genes contribute to specific traits: growth habit, drought resistance, photoperiod sensitivity, contributions to height, ear properties, yield, etc. A genome road map will ensure future projects are faster and more likely to produce a precise result.

When a genome is sequenced, do the benefits accrue to just the research community or do they trickle down to the everyday grower?

Many of the benefits of research will trickle down to the everyday grower. For example, in corn the benefits have been at least 90% to growers. Using the research, companies have been able to develop corn that is better able to withstand insects, cold, heat, wind etc.

Scientists could compare dahlia DNA to other flower species. An example of this might be comparing the various pathways that plants use to fight pests; not all plants have all of the pathways. Second, scientists could determine which pathways actually exist in dahlias. This would aid efforts to breed dahlias more resistant to specific pests. In particular, several “plant-specific” pathways exist that can silence viruses or prevent viruses from moving from leaf to leaf. Knowledge of which pathways exist would aid in strategies to breed virus-resistant lines. Finally, the genome provides a tool kit for assessing which genes are present in any given cultivar: during domestication and breeding, some varieties may have lost specific pathway genes. Knowing what’s missing, allows a scientifically rational approach to restoring genes in a particular variety by conducting crosses with a line that contains a functional copy of the missing information.

Down the line, breeding efforts could be greatly accelerated. For example, identifying the neighboring genes that might affect the outcome of a breeding experiment. What if an important disease resistant gene is close to a non-functional copy of a gene required for certain pigment in flower? In a cross, the pair of genes – one favorable for disease resistance and one limiting color production – will almost always be co-inherited. Knowing this in advance, a laboratory test can be established to screen hundreds or thousands of progeny to find the breeding pathways that will result in plants containing the good disease gene and a more favorable color gene. Such “molecular breeding” relies first on knowledge of the DNA composition of each gene and then on the order of genes.

Without the full genome, it would be unlikely that scientist would raise the funds for the genome sequence themselves and study dahlia genetics. Only crops like sunflowers, that have a cash crop potential, would incentivize companies to invest in genome sequencing to make the outcomes better and the crop stronger or more resistant.

Washington State University is currently researching virus in dahlias. Could genome sequencing tie in with that research?

Yes, sequencing the dahlia genome could pinpoint where genetic viral defenses might be found. It could increase the likelihood of breeding plants with enhanced viral resistance.

When the genome is sequenced, who owns the rights to that information?

Because the dahlia contributors are not “Federal” the data can be held privately, but it is customary to deposit it into a US government database for all scientists to use. If the genome sequencing information is put into the data base it will stimulate research using the dahlia DNA sequences.

What funds are needed for Phase Two?

ADS is currently engaged in raising $70,000 for the Phase Two of the Dahlia Genome Project. The $70,000 is needed for two years of a graduate students stipend. Without a dedicated graduate student doing the lion’s share of the work, the genome sequencing would not move forward. Since 2016, ADS has raised $150,200 in support of the dahlia genome project. Also with the funds raised, ADS recently supported a PacBio long read sequencing of the modern dahlia ‘Edna C’. It was completed in January 2023. High-C assembly is now in process to determine all the distinct chromosomes. This will be the first dahlia genome assembly.

The Scheetz-Cheuy Foundation has made a generous matching gift of $12,500 towards our goal.  Any and all donations are welcome.