The Passing of Frank Campise 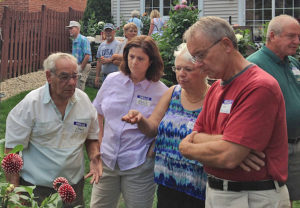 It is with deepest regret that Central States Dahlia Society and the Southtown Dahlia Club report the passing of Frank Campise. Frank was a longtime member of both Chicago-based societies as well as the American Dahlia Society. He passed at 87 years (young) after a determined battle against cancer.

Beyond being a great ambassador for the dahlia, Frank was the kindest, most generous fellow you could ever get to know. There are many cherished Frankyisms including, “I’ve never sold a dahlia” (he gave them away) , “I came from poor” (he advocated propagating your own dahlias to keep costs down), “Be sure to give your dahlias a little giddy-up” (liquid fertilizer), and ” ‘Kelvin Floodlight’ was the dahlia that got me started growing dahlias.”  A devoted mentor to all gardeners new to dahlias, his audiences would hang on every word. No other member in Central States has done more to encourage the recent growth of that society.

His passing leaves a huge void.