The following awards are bestowed for 2019:

All photos on this page by Alan Fisher. 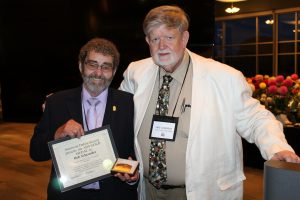 The American Dahlia Society is proud to present the ADS Gold Medal to Bob Schroeder. Bob is serving the ADS as our Judge Accreditation Chair, taking on this responsibility beginning in 2012. This position requires an immense amount of record keeping and the continual updating of those records. In addition to the book-keeping work, Bob has made it his special mission to bring greater recognition to ADS Judges, especially to those who are just beginning the judging journey. He also commends those judges who are advancing toward becoming ADS Senior Judges. Bob has developed certificates of commendation; he has distributed judging pins (lobbying the ADS Board for a continual supply) and he has done the necessary correspondence to give our judges the recognition he believes they deserve. These commendations have been received with great appreciation and in so doing, Bob has put our society good light.

Beyond the paperwork, Bob has been an active educator as well.  With his video cameras and projectors in hand, he has conducted seminars on dahlia judging far and wide. These seminars are a regular feature at our annual ADS National Shows. Being a traveling trainer has required a lot of travel, and this is something that doesn’t seem to bother Bob. The ADS lends Bob an occasional “attaboy” for his efforts, which is small payment for all he does. Hopefully Bob will accept the presentation of the ADS Gold Medal as payment for some of the good work he done?

We hope, for the foreseeable future, Bob will perform the various tasks of keeping records and that he continues the mission of both training and recognizing ADS members who are advancing their judging skills. 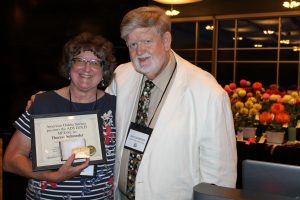 Terry Schroeder was elected to the ADS Secretary’s office in 2012. This is position that possesses multiple responsibilities and she has more than capably fulfilled the many tasks of that position. In so doing, Terry has given much of her personal time to the benefit of all in the ADS. The travel time and miles that she has willingly donated to the Secretary’s position are significant. This freewill giving of oneself has been a tradition for our ADS Secretaries and Terry has upheld that tradition.

They say that “necessity is the mother of invention.” For years members of the ADS Board traveled widely in order to attend scheduled meetings. As time passed, doing this became more impractical for many reasons. As our secretary, Terry has been on the forefront of leading the ADS Board in modernizing the way we conduct our business. Among the improvements during her tenure, Terry has been instrumental in pushing us ahead by updating our cyber capabilities. It hasn’t always been easy to improve our inter-board communications, but Terry has persevered, and the efficiency of our current system(s) are a far cry from the past.

In addition to serving as an efficient administrator of our communications, Terry is also a very nice person; someone with whom it is very easy to work. Congratulations to Terry on becoming an American Dahlia Society Gold Medal recipient. She is very deserving of this award. 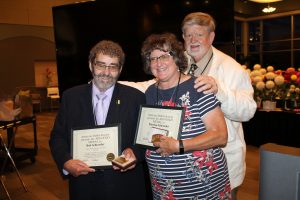 The American Dahlia Society is pleased to recognize Don Warden, stalwart of the Michigan Dahlia Association and Midwest Dahlia Conference, with the ADS Silver Medal. Don is an accomplished grower, shower and dahlia club worker. A longtime mainstay of the Michigan Dahlia Association, Don has chaired or co-chaired his local society’s flower shows for well over a decade. Perhaps two decades!

He has served the Michigan Dahlia Association in other capacities as well. His perspective goes beyond the activities of his local society. Don also actively serves on the Board of the Midwest Dahlia Conference. Besides being an all-around nice guy, Don easily fulfills the criteria that makes him a fine “dahlia ambassador.” 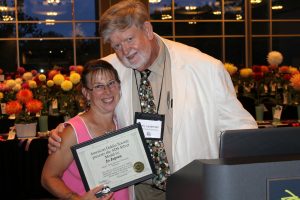 Joanne Jepsen is awarded the American Dahlia Society’s Silver Medal. This bundle of energy, who goes by the nickname “Jo,” is a deserving recipient of this special award.

Active in the West Michigan Dahlia Society since its inception and the Grand Valley Dahlia Society before the name change, Jo has served her local club well. She typifies the type of person who energizes others to take-on greater challenges. This has been exhibited by the role she took in the 2013 Combined ADS National and Midwest Conference Show and again this year, 2019, when the WMDS again agreed to host the combined show.

Jo is a worker and fine “dahlia ambassador.” The American Dahlia Society asks that Jo accept this award in appreciation for what she has done to promote her local society and the dahlia. Congratulations Jo! 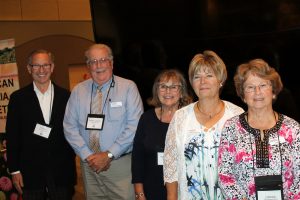 The ADS takes pleasure in presenting Special Commemorative Medals to persons who have been identified as being instrumental to the success of hosting ADS National Shows. It takes many hands to make a National Show a reality and therefore the awards list can never be inclusive. That said, the following five people are being recognized for their dedication to making the 2019 ADS National Show a success.

Irv Marcus – Irv was charged with organizing the honor table entries, and he in known as a member who always shows up when and where he is needed! Thanks Irv!

Richard Lamberts – Richard is a Trustee of the West Michigan Dahlia Society. He was given the responsibility of chairing the Promotions Committee for the 2019 show.  Thanks Richard!

Maxine Kilcrease – Maxine is a Trustee of the West Michigan Dahlia Society. She is recognized for coordinating the wonderful catering and beverage services. An indispensable function to be sure. Thanks Maxine!

Kathy Stevenson – Kathy is the Recording Secretary of the West Michigan Dahlia Society. She has been the go-to person when planning with the hotel, with Frederik Meijer Gardens and the lovely “selfie area.” She also coordinated the entire arrangement section. Thanks Kathy!

Lillie “Lil” Eitniear – Lil is the Treasurer of the West Michigan Dahlia Society. She is being recognized as the show registration chair, Facebook spokesperson, and proofreader extraordinaire! Thanks Lil! 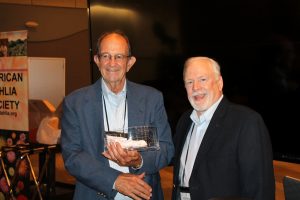 Brad Freeman, President ADS, presented this award at the 2019 National Show Banquet.  Here are his comments:

It was my honor to present to Dr. Richard Peters who is referred to as Rick and “Doc” the President’s Award at the 53rd American Dahlia Society Show in Grand Rapids, Michigan on August 31, 2019.

“Doc” Peters is a retired pathologist and had served as a county Medical Examiner (Coroner). He specialized in nephrology, blood banking and transfusion medicine.

A member of the Grand Valley Dahlia Society, which later changed its name to the West Michigan Dahlia Society, “Doc” Peters is largely credited for the rebirth of the society.

“Doc” Peters is the current Corresponding Secretary of the West Michigan Dahlia Society and the Secretary/Treasurer of the Midwest Dahlia Conference.

“Doc” Peters was the Editor of the publication “Raising Beautiful Dahlias the Easy Way” that was widely circulated and is still available if you search the Internet.   It is a collector’s item now and deserves a place on your shelf of dahlia reference books.

In addition to serving his local dahlia society, “Doc” Peters served as the First Vice President of the ADS between 2006 – 2008.

Dr. Richard Peters is best known for being a great mentor and teacher to many dahlia lovers in the west/southwest area of Michigan.  He is absolutely a prominent person and voice in the affairs of the Midwest Dahlia Conference.