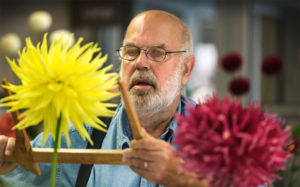 With great sadness, the Midwest Dahlia Conference reports that long time leader in the dahlia world, John Thiermann, passed away Sunday, August 19, 2018, after a long battle with cancer. 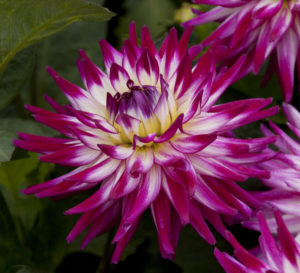 John loved big dahlias, but was best known for his miniature introduction, Badger Twinkle.  He was the proprietor of J T Dahlias, which, in addition to carrying his introductions, was the North American agent for the Penhill dahlias from South Africa.  John had relationships with many international dahlia growers.  These relationships resulted in dahlias from around the world being introduced to the United States.

John served the dahlia community for forty years.  He was a member of the ADS Classification Committee.  He served on the board of the Midwest Dahlia Conference, seemingly forever, and was involved with local societies in Wisconsin and Illinois.  Dahlia organizations at every level and his many dahlia friends will sorely miss John.

John worked at Allis Chalmers, Bucyrus Erie, and Briggs and Stratton as a draftsman/designer and holds several patents.

He leaves his wife Barbara, daughters Susan, Karen and Dawn and their families.