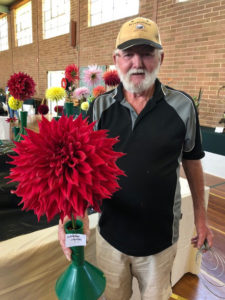 The dahlia just lost a world ambassador. John Menzel passed away peacefully at his home in Winkie, Australia, on April 10 after a long battle with a chronic muscle disease.  John and his wife, Anne, traveled the world promoting and gathering information about the dahlia for decades.

John was a regular speaker at many dahlia gatherings and meetings including the ADS National Show and the New Zealand National Show. He shared his knowledge openly and freely. He was able to grow dahlias with great success in the desert where temperatures were commonly and consistently greater than 100 degrees F.  John pioneered the pulse watering method and the use of a Kaolin clay spray as “sunscreen” in addition to using white shade cloth for sun protection.

John and Anne started exhibiting dahlias in 1980.  John’s grandmother had grown a very large white variety.  Over the decades they introduced over 40 varieties with the “Winkie” prefix including the giant “Winkie Colonel” (AA ID R). He was a keen exhibitor and took pride in the fact that he eventually was able to win championships with all if his own introductions.  He authored perhaps the best book on dahlia culture entitled Dahlias in Australia, the Winkie Way.  The book is an invaluable reference.

Anne reported that knowing his leave-taking was imminent, she and John had laughed earlier on the day he died that he waited to pass until the end of the dahlia season.  She had just cut the last of the dahlias two days earlier.  Well, dear friend, you finally get to see the perfect dahlia.

Meanwhile, our world mourns the passing of a true legend.  Thanks, John, for all your dahlia wisdom, memories, wit, and superb sense of humor.  We will miss you.