The ADS is sad to report the passing E.H. “Ted” Collins,  MBE.  Ted was a giant in the dahlia world not only in the United Kingdom, but worldwide.  He is the author of several books about dahlias. 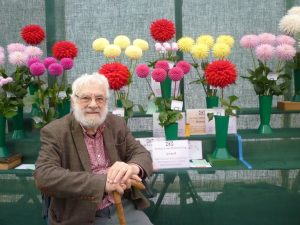 Picture taken by Lesley Whayman at the NDS Show, Wisley, in 2015

In the summer of 2017, the ADS  awarded the ADS Silver Medal to Ted Collins of the United Kingdom.  Here are the comments made at the time of the award:

Ted Collins served as the General Secretary of the National Dahlia Society (NDS) for many years. His long and excellent service was recognized when he was presented the title of Member of the Order of the British Empire (MBE). This is an honor bestowed by the Crown, and in this case, by the reigning Queen Elizabeth. While the ADS Silver Medal doesn’t necessarily carry this degree of weight, it does give our society the occasion to recognize someone who has made a major contribution to the dahlia.

Ted is especially commended for his outlook concerning the NDS’s relationship with dahlia societies worldwide. This perspective was international in spirit. Ted collaborated with the ADS membership chair for many years, processing memberships for NDS members who live in the United States. He also traveled to the U.S. and attended the ADS’s Millennial Show in 2000 hosted by the National Capital Dahlia Society. When our ADS Membership Chair Alan Fisher, and his wife Hannah, planned a visit to England this past summer, we found the timing to be perfect. With some juggling of travel plans, Alan and Hannah trusted they could meet with Ted and make the presentation. That happened and it was excellent. Thank you, Alan and Hannah. The ADS congratulates Ted Collins as a 2017 recipient of the ADS Silver Medal.