The following awards are bestowed for 2020:

ADS President’s Award, is presented to Dick and Danielle Parshall 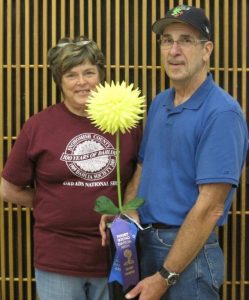 The President’s Award is given to individuals who have gone far beyond being simply interested in dahlias.   It identifies people who have seriously promoted the dahlia and who have been especially supportive of the community of dahlia lovers extending the local society.  Being intimately involved with the operation of the ADS is not a requisite.   In a normal year, this award would be presented at the ADS National Show and in general is used to recognize someone from the area around the ADS National Show venue.

The 2020 ADS National Show was scheduled to held in Wenatchee, Washington in September but the event was postponed due to the COVID 19 pandemic.   Although the ADS National Show was not held as scheduled I did present the President’s Award to Dick and Danielle Parshall at the Annual Meeting held on September 13, 2020 via Zoom.  It is unfortunate that Danielle Parshall passed away in July of this year before I could present the award to both of them.  However, I do plan on presenting, in-person, the President’s Award to Dick Parshall at a Federation of Northwest Dahlia Growers event in 2021.

Dick and Danielle’s contributions to dahlia culture and many dahlia organizations were many faceted:

Dick and Danielle were inducted into the Federation of Northwest Dahlia Growers Hall of Fame in 2016.  I now have the honor and privilege of awarding them the ADS President’s Award in 2020.