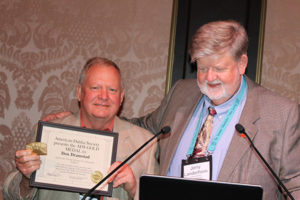 The American Dahlia Society is honored to present its highest medal award to ADS President Donald Dramstad. Don is successfully completing his second term as ADS president. He’s endured the headaches and sometimes, unfortunately, the heartaches of being the president for the past four years. Along the way he has also been able to experience the successes of being the president when good things happen to the ADS. Every president has their own style and that includes Don, who has exhibited a calm demeanor and measured approach to our society’s affairs. While being the president is not a daunting task, it does require much of one’s personal time. In this vein, Don has been good at delegation. This has allowed others in the chain of command to take on greater responsibilities and that bodes well for the future of the ADS. He indicated some time ago that four years as president is what feels is right for him. (We couldn’t talk him into another two years.)

He has expressed that he looks forward to serving as the next Immediate Past President. In this new role, we expect that Don will provide us with his perspective from time to time. We don’t let our successful officers escape so easily. As Don and wife Rhonda move on with their lives, we do expect they will keep the ADS close to their hearts. We wish them nothing but the best in the future. In the meantime, it our pleasure to present Don Dramstad with the ADS Gold Medal. Thank you for your service and we wish all the best going forward.

Longtime Greater Philadelphia Dahlia Society member Dr. Timothy Elkner has tirelessly provided horticultural information to the society regarding growing dahlias. A past GPDS President, Tim has unselfishly shared his experience as Lancaster County Penn State Extension Service Educator to afford us an invaluable resource available to few other societies. He is currently co-chairing the National Dahlia Show Committee and continues his job as our society’s education director. Over the years he has filled many positions for the GPDS and seems to accomplish any task he has undertaken in a seemingly effortless and professional manner.

From the website of The Pennsylvania State University: “Tim is a commercial horticulture Extension Educator based in Lancaster County. He holds a bachelor’s degree in Ag Sciences from Rutgers University, a master’s degree in Horticulture from Clemson University and a Ph.D. in Horticulture from Virginia tech. His programming focuses on integrated crop management of vegetable and fruit crops. He assists growers with production issues including disease and insect management, fertility, irrigation and variety selection. He is experienced working with conventional field as well as high tunnel and greenhouse production systems. Jobs at Penn State Extension Service: Diseases and insect management, fertility, irrigation, and variety selection, Commercial Vegetable Production, Commercial Fruit Production Commercial Tree Fruit Production.” 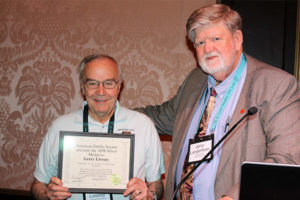 Gerry has been a member of the GPDS for twenty-two years. Although his health has limited his involvement recently, he was always ready to lend a helping hand with whatever job needed doing or whatever committee needed a member. He served as President of the Society from 2006-2008. He extended his term a year to insure a smooth, coordinated, and successful National Show in 2008. We all benefited from his understated and straightforward approach to overseeing a volunteer organization. We especially enjoy his ultra-dry sense of humor.

A second-generation member of the GPDS, Dean grew up immersed in dahlia culture. He learned how to grow prize-winning dahlias from his father Jim Thomas, a master dahlia grower, senior judge, and longtime member of the society. Dean stepped right into the position of chairman of the society’s annual shows when his dad decided he had done it long enough. He is serving as Co-Chair of the 2018 National Show. He also serves on the ADS Classification Committee. The GPDS is fortunate to have such an experienced and knowledgeable person in these important positions. He is also following in his dad’s footsteps with his skills at growing prize-winners.

Jim Thomas has been a member of the Greater Philadelphia Dahlia Society for over forty years. He well-known in the region as successful grower and exhibitor. His first time as an exhibitor was in 1976 where he won the Best Basket in Show Award at a major show. He has followed-up on that success numerous times including winning a top prize at the 2015 ADS Centennial Show on Long Island. Beyond the show hall, Jim has dedicated much time speaking to local garden clubs, mentoring fellow growers and conducting judging and growing seminars for the GPDS. Jim is always willing to share his vast experience and knowledge with anyone interested in growing dahlias. Jim has served as GPDS president, show chair, show secretary, ADS Representative and society trustee. He has been a successful dahlia man partly because he has received great support from his wife Vilma; especially when it comes to staging his winning multiple bloom and basket entries. The information we have is that Jim has no intention of slowing down. That is good!

The American Dahlia Society appreciates the planning and hard work dahlia societies and conferences go to when hosting the annual ADS National Show. Many local members become involved in the process and the ADS commends the dedication of everyone who has contributed to the cause. When individuals and couples are identified as performing key roles in “going above and beyond,” and when given this information, the ADS may honor them with the ADS’s Special Commemorative Medal Award. At the 2018 National Show, the following Greater Philadelphia Dahlia Society members are recognized for what they have done to ensure the success of this event. We present the following members with this award: 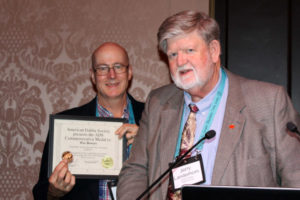 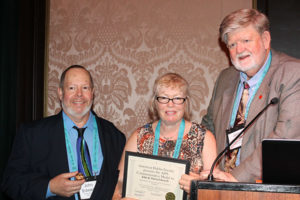 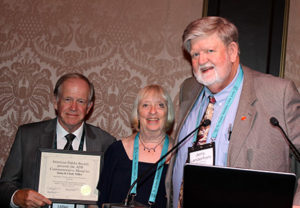 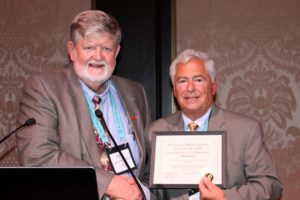 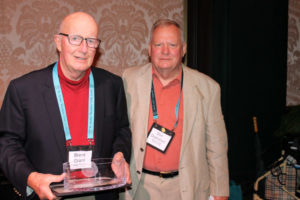 No one who has more passion for dahlias than Brent Grant. He is enthusiastic about all phases of growing dahlias, but his zeal for promoting our flower to anyone and everyone who shows an interest is even more significant. As a matter of fact, he can rarely be dissuaded from expressing his love of dahlias even if someone shows little interest! Brent has backed up his love of all things dahlia by serving The Greater Philadelphia Dahlia Society since 1992 in many capacities: President, ADS Representative, and as a member of numerous committees in both the GPDS and the ADS. He edited the newsletter “Dilly Dahlia…ing” for many years. He has pretty much single-handedly grown our annual tuber sale to two events in two locations, each with a dedicated following. All the containers and show materials were stored in his basement for many years; when it was time for a show, people trekked through the house carrying everything upstairs! He served as co-chairman at our last National Show in 2008. It has taken a seven-person committee to do what Brent did preparing for the show ten years ago – the standard was high!

His dedication is evident in everything he has done to grow The Greater Philadelphia Dahlia Society to what it is today. Along with his wife Marge, an equally valuable member of GPDS in her own right, Brent has been an ambassador for dahlias all over the world. He has given many talks locally and traveled far and wide. With his gracious, pleasant manner, he has made many friends. He is always willing to generously share what he has learned over the 72 years he has been growing dahlias.

Brent has truly earned his nickname – The Dahlia Dude! 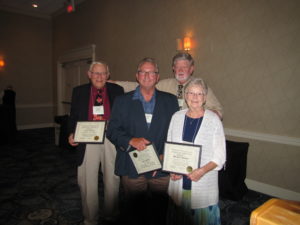 Harriet is well-known through-out the conference as being dedicated to dahlias and to Midwest dahlia societies. She is well-known as a very successful show person. A mainstay of the Mahoning Valley Dahlia Society, Harriet has brought great energy to her local dahlia society. She travels widely to participate in many Conference activities as well. To list all that she has done, and continues to do, to promote dahlias would fill volumes. Suffice to say, the American Dahlia Society and the many MDC members who know Harriet, have great confidence that Harriet has exceeded the standards required to be awarded the Silver Medal. Congratulations Harriet!

Randy is the current president of the Midwest Dahlia Conference. He has the title and all the obligations and responsibilities that go with it. The president is the go-to person when there are serious concerns to be dealt with and on even more rare occasions, when there is good news reported! Unfortunately, as Randy can attest, dealing with concerns gets most of your attention. That’s life at the helm. Good presidents grow into the job and so has Randy. He is sensitive to what’s going on around the Conference and while it would be easier for him to simply limit his focus to northern Ohio, Randy is responsive to the needs of all the dahlia societies across mid America.

The American Dahlia Society values the dedication and good work regional leaders bring to the betterment of all in our dahlia world. The ADS expresses its appreciation to Randy Foith by awarding him the ADS Silver Medal and he is commended for his dedication to the Midwest Dahlia Conference and for his role in perpetuating its aims and purposes.

Jerry is known as a “superstar” worker. Maybe he should also be called a super-charged worker? His organized approach in taking on tasks has greatly benefited the Dahlia Society of Ohio. Does this come from his background where he is highly regarded for his analytical skills? Perhaps. It apparently helps when it comes time to host large events such as the 2018 Midwest Dahlia Conference Show.

The DSO (Dahlia Society of Ohio) has relied on Jerry for much of the planning and execution of these special events. When the need arises, he has represented his home society at Conference meetings. He does the things necessary to keep the society moving forward. The Dahlia Society of Ohio is successful because of members like Jerry. As a dahlia lover who probably would like to spend more time in the garden, Jerry Moreno heeds the call when there is society work to be accomplished. Jerry is more than deserving of the ADS Silver Medal.