The various 2017 ADS awards were presented at the National ADS Show held in Chcago. These awards included:

Rosemary Zatkovich served as General Secretary of the ADS from 1986 until 1996. Today at 92 years young, she continues to be a proud supporter of the Society. Back in the day when Rosemary held office, the ADS Executive Board scheduled anywhere from three to five business meetings a year. Elmira, New York, Washington D. C., Chicago, Detroit and Denver, were just some of the locations where the Board convened. That necessitated a lot of traveling for Rosemary and her loyal husband John, but they loved it. They also loved the dahlia people they came to know through their travels.

Rosemary unfortunately lost John at age seventy. The dahlia world also lost the fine dahlia man who had introduced the well-known “Z” dahlias and other fine cultivars. Without her life’s companion, Rosemary relinquished her position on the Board. Until recently, she has spent winters in Florida, as she did with John, and summers busy in her suburban Detroit garden. Time rolls on, but her love for dahlias and dahlia people has continued. Rosemary currently lives with her sister.

It took more than a few minutes of research to find her, but when that happened, it was the same Rosemary on the other end of the phone. She exclaimed, “You found me!” When told she was to be a recipient of the ADS Gold Medal, she said, “If I could, I would walk to Chicago to get it!” That statement pretty-much sums up the spunkiness of Rosemary Zatkovich. She served the American Dahlia Society very well and though the award should have been conveyed to her sooner, the ADS expresses pride in presenting the 2017 Gold Medal to Rosemary Zatkovich. 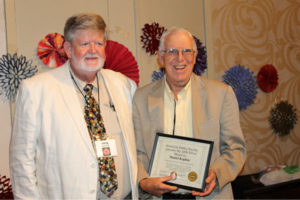 American Dahlia Society commends Dan Kaplan for being instrumental in Central States Dahlia Society’s ability to host three major dahlia shows within the past ten years. This has involved hosting two ADS National Shows combined with the annual Midwest Dahlia Conference show. Also, throw in an additional Midwest Conference Show between the Nationals for good measure. The ADS is appreciative of all societies that host these important shows, recognizing that much planning and dedication goes into the process. From fund raising, to doing all the budget-related and other planning work that goes into hosting, this can be a daunting undertaking. It means that a lot of personal time is given to the benefit of others. It’s what good dahlia people do! Dan has done that three times in ten years.

We congratulate Dan with the ADS Silver Medal for being a dahlia ambassador through his unselfish and uncanny ability to coordinate successful events of substantial proportion. 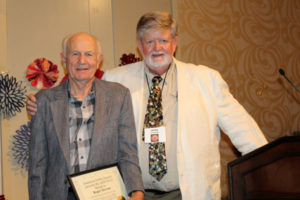 The American Dahlia Society frequently accords the ADS Silver Medal to individuals, when the Society learns these persons are especially influential in supporting the greater dahlia community. The ADS refers to these folks as being dahlia ambassadors. Roger Stevens exemplifies what being an established dahlia ambassador is really about. They are people who have acted importantly to improve the visibility of the dahlia. Because of their positive actions within their local environs; the dahlia has been strengthened as a major player in the world of floriculture.

Roger is an experienced grower who has been a leader and mentor in the Midwest and particularly in Wisconsin for many years. He has been an advocate of the programs and purposes of the ADS and his love for dahlias has been shared with many. The ADS commends Roger for all he has done for the benefit of the dahlia. Congratulations Roger on being a recipient of the ADS Silver Medal. 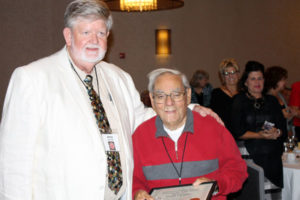 If popularity contests decided who was to receive the American Dahlia Society Silver Medal, Frank Campise would have already amassed a ton of them. In his own unique way, Frank has inspired literally hundreds of people to become dahlia growers. He had been a successful dahlia man for years. This evolved into taking over and diligently maintaining a large public dahlia garden. Located near a busy thoroughfare, the garden was a showstopper. As interest increased, Frank introduced his Tuesday evening dahlia seminars. It wasn’t long and he had a legion of followers who would hang on his every word. (They still do.)

Frank loves to propagate dahlias through cuttings and he willingly shares his techniques and knowledge with anyone who would like to do the same. Frank knows that when his “students” have success with propagating, that he has locked them in. This has been Frank’s mission as a special dahlia ambassador; mentor new growers and promote growing dahlias as something that everyone should do. People like Frank are a huge asset to the American Dahlia Society and he is unquestionably a person deserving of the ADS Silver Medal. Congratulations Frank! 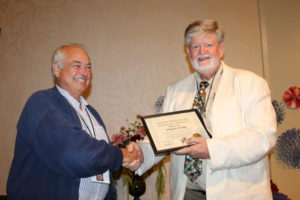 Educator, Educator, Educator are the three words that describe Charles Craig. As a professional educator, Charles’s life’s work has been dedicated to educating many young people. As a dahlia man, he has dedicated himself to teaching many others how to grow and show dahlias. He is always there to help someone stage a multiple bloom entry or to position flowers properly in a vase or other container. This ability to instruct others is manifested annually at shows around the Midwest. Whether at a State Fair or at a sanctioned ADS show, Charles is there to give tips, some maybe not so subtle, but all-good when it comes to making the person’s blooms look their best.

Charles’s patience always shines through. Charles Craig is a fine dahlia ambassador and the ADS commends his willingness to help others. Congratulations Charles on receiving the ADS Silver Medal. 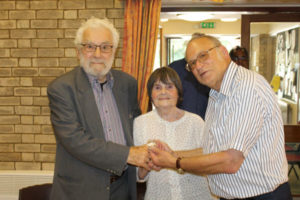 The American Dahlia Society had a wonderful opportunity this past summer to award an ADS Silver Medal to Ted Collins of the United Kingdom. Ted served as the General Secretary of the National Dahlia Society for many years. His long and excellent service was recognized when he was presented the title of Member of the Order of the British Empire (MBE). This is an honor bestowed by the Crown, and in this case, by the reigning Queen Elizabeth. While the ADS Silver Medal doesn’t necessarily carry this degree of weight, it does give our society the occasion to recognize someone who has made a major contribution to the dahlia.

Ted is especially commended for his outlook concerning the NDS’s relationship with dahlia societies worldwide. This perspective was international in spirit. Ted collaborated with the ADS membership chair for many years, processing memberships for NDS members who live in the United States. He also traveled to the U.S. and attended the ADS’s Millennial Show in 2000 hosted by the National Capital Dahlia Society. When our ADS Membership Chair Alan Fisher, and his wife Hannah, planned a visit to England this past summer, we found the timing to be perfect. With some juggling of travel plans, Alan and Hannah trusted they could meet with Ted and make the presentation. That happened and it was excellent. Thank you, Alan and Hannah. The ADS congratulates Ted Collins as a 2017 recipient of the ADS Silver Medal. 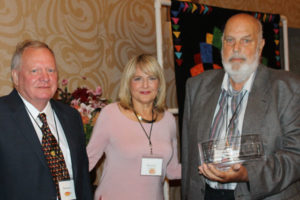 John Thiermann has had a strong presence in the MIdwest dahlia scene seemingly forever. He is certainly well-known for the dahlias he has introduced, including, but not limited to, ‘Badger Twinkle,’ ‘Evening Lady,’ ‘Henry Graf’ and ‘My Karen.’ Far exceeding his personal accomplishments, however, are the unselfish contributions John has made to benefit societies in the Midwest Dahlia Conference.

John’s dedication and support of dahlia societies in the region is reminiscent and follows in the footsteps of our late and beloved Bud Moore. That’s a strong, but truthful statement. No active dahlia man in the Midwest today has given so much to so many societies. John has willingly served in nearly all board capacities in his home society, the Dahlia Society of Wisconsin and he currently serves on the boards of the Badger State Dahlia Society, Southtown Dahlia Club and Central States Dahlia Society. He has been a board member of the Midwest Dahlia Conference for many years.

John has authored a number of educational papers on dahlia culture, he is the Chair of Judges Training at Society Level for the Midwest Dahlia Conference and he has continually served on the ADS Classification Committee. John was fortunate to have been mentored by some of the best growers in the region and he, in turn, has given back that knowledge from the heart. Obviously, John’s love of dahlias has expanded beyond what would be considered a normal sphere of influence. There is no question that John Thiermann deserves the recognition associated with being an ADS President’s Award recipient.