One of the highlights at the American Dahlia Society (ADS) National Show held on Long Island in September 2015 was the Awards Ceremony.

ADS maintains a strong relationship with the National Dahlia Society in the UK. Each year they send a representative to our National Show. This year’s guest was David Reid, who presented the Stredwick Medal to ADS President Don Dramstad, in celebration of the ADS Centennial. In the picture below Don is on the left and David on the right. 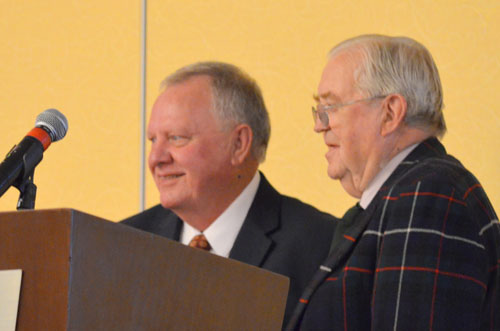 The most prestigeous award of the ADS, the Gold Medal, was presented to Lou Paradise at the ceremony. The Gold Medal was also presented to Jim Chuey and in memory of Carl Chuey a few weeks earlier at the Midwest Show. This medal is awarded to people who have made significant contributions to the ADS and the dahlia.

The ADS President’s Award was conferred on William “Bill” Wolkoff. The ADS President’s Award is given to persons who have made a superb effort, in the region or locale where they live, to one or more programs and projects that have promoted the dahlia. The past several years, the recipients have received a large engraved glass bowl. A certificate is also presented. The award was presented by ADS President, Don Dramstad to the 92 year old recipient.

Six Silver Medllions were awarded. These pure silver medallions were given to individuals who are ambassadors for the dahlia. They need not be active in ADS affairs nor do they need to be from North America.

David Reid and Marjorie Schnerr received their Silver Medallions at the ceremony.

Harry Rissetto received the ADS Presidential Life Membership Award. This award is similar to ADS Gold Medal in that it recognizes a long tenure of dedication to the ADS. It is conferred infrequently. It grants the recipient a “free” membership in the ADS for the rest of his or her life. This year, the recipient received a hand-made quilt/throw (made by Barbara Miner) constructed of dahlia fabric and incorporating a photo of Harry’s dahlia “Amy’s Star” which had been transferred to fabric. A certificate was also presented.

On the occasion of the ADS Centennial Show and after 26 years, the Alger Silver Cup was officially retired. It found its forever home in Marysville, Washington. Read more.