The 2021 President’s Award is presented to Jerry Moreno. 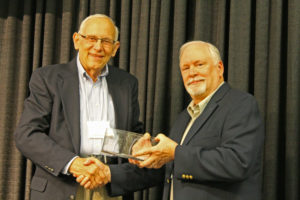 It was my honor to present to Jerry Moreno the President’s Award at the 54th American Dahlia Society National Show in Wooster, Ohio on September 11, 2021.

Jerry is a Professor Emeritus at John Carroll University. He taught there for 40 years and has been “retired” for 13 years but still teaches and tutors every semester – because now he just has the fun part of the job, teaching.

He is the recipient of several prestigious teaching awards and is highly respected in his area of expertise, statistics. He has served his community over the years including as a member of the local school board and as an elder in his church.

Jerry is a member of the ADS virus research project committee. He applied his skills in statistics to help the committee understand the data from years of virus testing.

Jerry has been the President of the Dahlia Society of Ohio for many years. Once the decision was made to host the ADS National Show in 2021, he was the driving force for making it happen. He guided the big picture for the show and, at the same time, resolved the numerous details essential to making it happen.

Jerry is a prominent person in the Dahlia Society of Ohio and the Midwest Dahlia Conference. On behalf of the ADS, I want to recognize Jerry for his many contributions to the dahlia and dahlia organizations – thank you.

The American Dahlia Society is appreciative of the planning and dedication local societies put forth when hosting an ADS National Show. It takes many hands to accomplish this. As show time nears, we ask for the names of local members who have gone the extra mile to make the show successful. To show the ADS’s appreciation, we award the ADS Commemorative Medal, which is gold-plated and engraved, to those members who have been recognized by their peers. For 2021, the ADS is pleased to make Commemorative Medal presentations to Todd Imhoff, Mike Weber, and Bob Wenning. Congratulations to you from the American Dahlia Society. 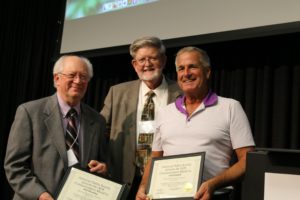 The American Dahlia Society Silver Medal is awarded to persons who have shown continual support of the dahlia through a variety of methods. There are many roads that can lead to becoming a “dahlia ambassador.” This medal is not necessarily given to those who have given exceptional time to the ADS, but also individuals who have been significant promoters of the dahlia. This year’s awardees have certainly met the criteria. 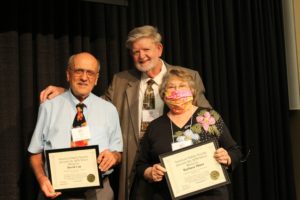 David Cap, without question, has dedicated himself to promoting the dahlia. For much of two decades, Dave Cap has served as the Dahlia Society of Ohio’s (DSO) show chair and this averages three shows a year! Many of the logistical aspects of hosting shows are reflected in Dave’s dedication to the dahlia. Storing and transporting show materials puts his “dahliamobile” to good use. Dave also is a propagator, providing plants for the society’s annual sales. Like many other dahlia lovers, Dave shares his beautiful blooms. They can be found in the homes of friends and at local businesses, including Polish bakeries. The DSO, as well as the dahlia world, is fortunate to have Dave Cap promoting the dahlias. Congratulations Dave on becoming an ADS Silver Medal recipient.

Excepting those who have provided beautiful dahlia blooms and images for display, there are likely few who have done more to express the diversity and beauty of the dahlia than Barbara Miner. Barb’s skills with needle and thread are well-known within our dahlia community. She has worked tirelessly to create a whole raft of dahlia-themed goods that have spread the love of the dahlia and enrichened the coffers of dahlia societies, and in particular, the Dahlia Society of Ohio (DSO). As far as the Midwest is concerned, the Boutique at the DSO shows is famous for all the various and unique items that are available for purchase. Long after our flower blooms have faded, Barb’s creativity continues to brighten our homes and our lives. Barb Miner typifies what it means to be a dahlia promoter and ambassador. Congratulations Barb on becoming an ADS Silver Medal awardee.

The American Dahlia Society congratulates this year’s medal awardees. They are representative of fine dahlia people, who through their dedication to serving locally, make the ADS the vibrant society it is today. 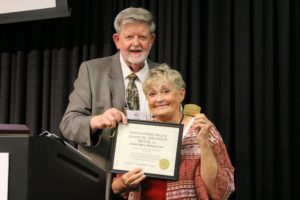 The American Dahlia Society is honored to present the ADS Gold Medal to Linda DeRooy Holmes-Cook. With dahlia DNA in her blood and coming from a strong gardening background, Linda has perpetuated her family’s tradition of finding the joy in growing our unique and beautiful flower.

Linda has served for several years as Editor of the “Bulletin of the American Dahlia Society.” Prior to that, Linda worked to improve our ADS website. The Bulletin has continually improved, with each succeeding editor adding quality changes to make it the periodical we so-much look forward to receiving. Linda has worked to maintain that legacy for improvement and as a result, our Bulletin is better today than ever before. Bringing together all the elements of our publication four times a year requires perseverance and dedication. As has been testified by previous editors, the short break between issues is just that, a very short break! We greatly appreciate Linda’s efforts.

As a mainstay in the North Central Washington Dahlia Society, Linda has contributed much to the increase in dahlia interest in a part of Washington where gardening can be rewarding as well as challenging. She has served exceptionally well in her locale, carrying on where her renown father and dahlia man, Tony DeRooy, left off.

It is Linda’s significant participation in the business of ADS Executive Board that has secured her place as an ADS Gold Medal Recipient. Linda’s insightful thoughts (and opinions) have been valuable to the operation of the Society. Linda has acted both locally and globally to share the knowledge gained from a lifetime in the garden. Congratulations Linda, on becoming an American Dahlia Society Gold Medal recipient.