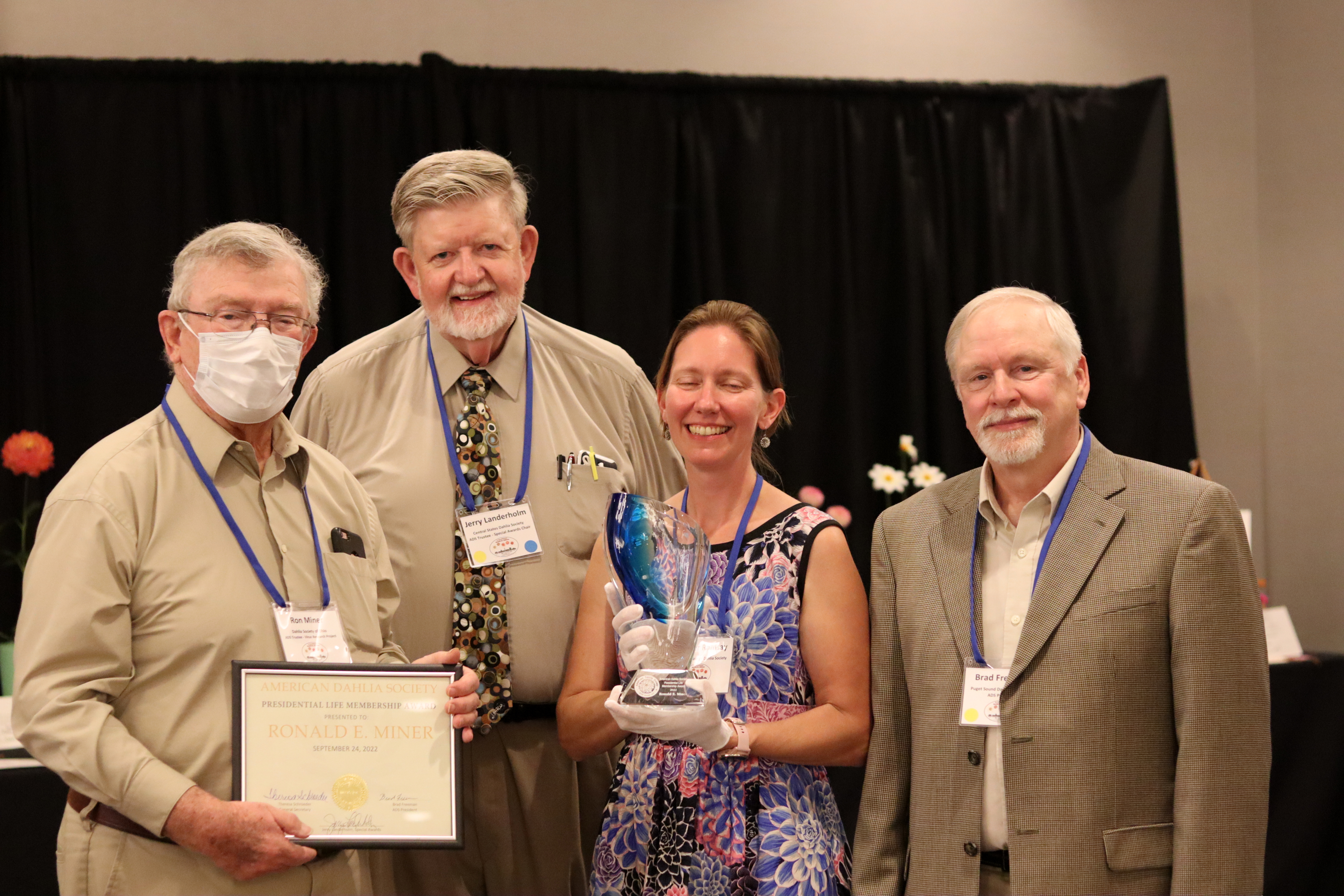 On exceedingly rare occasions the American Dahlia Society awards the Presidential Life Membership Award. This year’s award ceremony was one of those special occasions when Ron Miner was honored as a recipient of this award.

Ron has been active in ADS affairs for many years, including five years as our president. A man of science, Ron has advocated that we continually improve our approach to many aspects of our society’s operation. He has most recently become a huge advocate for the reduction of viral diseases in our gardens. Whether growers are aware of it or not, this is the principal bane of dahlia growers everywhere. Ron has worked closely with Washington State University and the Sheetz–Chuey Foundation in bringing meaningful benefits to those of us who love the dahlia. He believes this can be accomplished through continual research and continual education.

We laud Ron on being one of the champions for promoting healthy dahlias in everyone’s garden and we congratulate him on becoming one of the select few ADS members to be awarded the Presidential Life Membership Award. Ron Miner’s dedication and service to the American Dahlia Society have been exceptional.

Nick Weber, has been involved with dahlias since 1975. Prior to that he received a PhD in biochemistry from the University of Indiana, served in the Army, and began a career in public service that included Walter Reed Hospital and the U.S. Department of Agriculture.

Nick has served as President of the National Capital Dahlia Society and on the ADS Research Committee. He is an expert dahlia grower and his entries are frequently on the head table. He has received an award from the 4H for his work teaching about dahlias. He is a mentor to generations of local dahlia growers.

Nick has taught at the University of Maryland and Catholic University, grows about 700, roses and is an expert on “Old Roses”. He is a trout enthusiast and a leader in Trouts Unlimited. We in the dahlia world know that he likes dahlias best.

This year’s President’s Award goes to both Nick and Rosanne Weber.

There are many elements that go into hosting a successful ADS National Show. Accomplishing this requires an extra measure of dedication on the part of local, and at times, regional society members. Sometime ago the ADS decided it would be appropriate to honor the “locals” who plan and chair the shows, those who do all the required things to set-up the shows, pay the bills, secure the venue and lodging, coordinate guest registrations and handle tasks like stuffing goody bags and running boutiques. We refer to these folks as the “worker bees” as these jobs are significant and necessary. 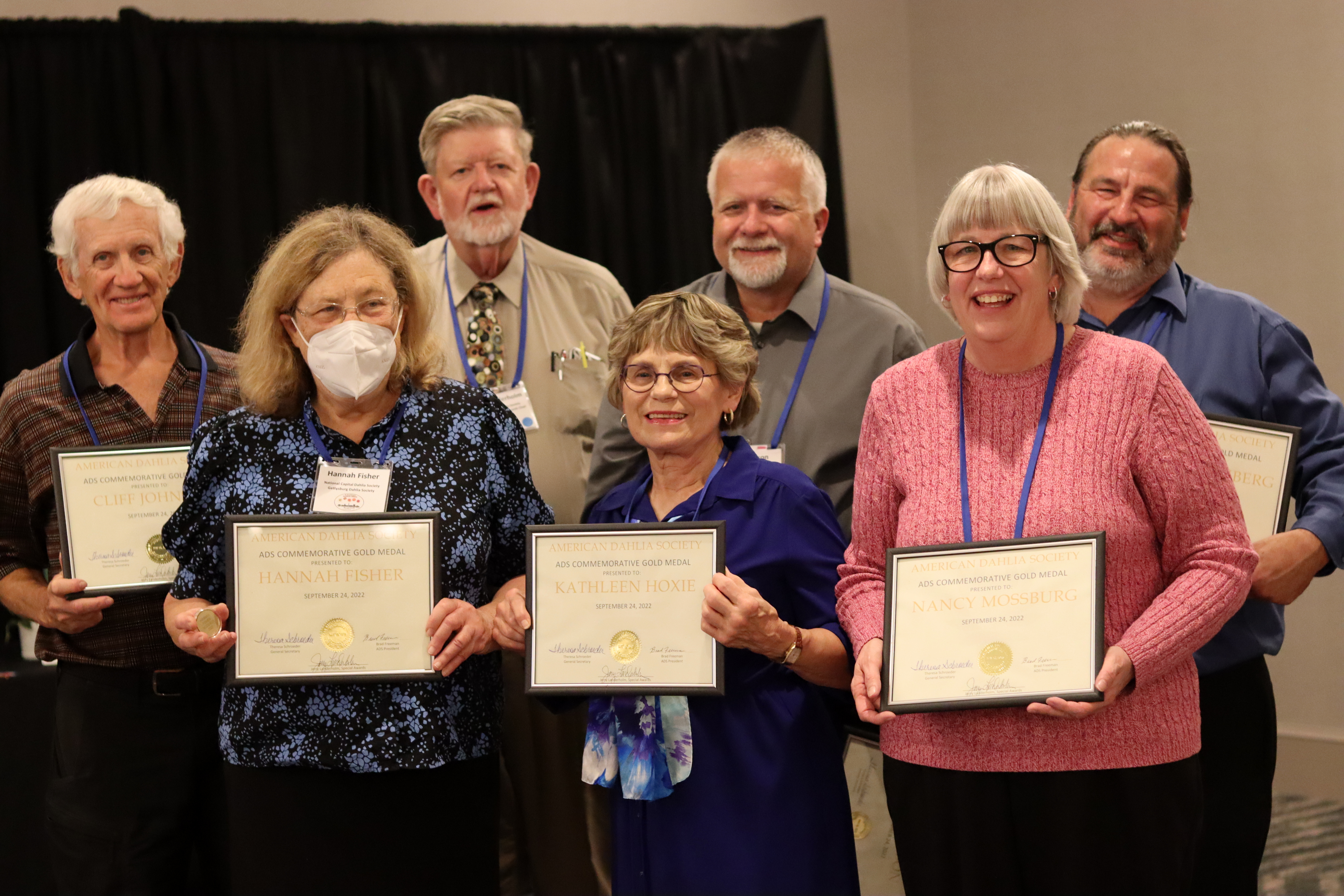 Three ADS Silver Medals were presented to Elkhart Dahlia Society members at the Midwest Dahlia Conference Show in Shipshewana, Indiana on September 10, 2022. Steve Kuiper and his daughter Cammi Waggoner each received a Silver Medal. Steve has provided a great service to the ADS for the untiring work he has provided at the ADS Bonneyville Trial Garden. He has served under the auspices of Mac Boyer, a renown dahlia man and past president of the American Dahlia Society. Cammi has worked alongside her father Steve, doing all the necessary things that go into operating a successful trial garden. In addition to being known as exceptional dahlia growers and showers, Steve and Cammi have dedicated themselves to their local society and other societies in the region. They are a good team and certainly can be considered dahlia ambassadors.

Rusty and Anita Ritchie received an ADS Silver Medal for their special mentorship skills and for their participation in many dahlia-related activities in their home area of Elkhart and across the Midwest region. If there is a plant sale, show or educational event that focuses on the dahlia in Northern Indiana, it is to be expected the Ritchies will be there making a pitch for our flower. Rusty and Anita personify what it means to be a dahlia ambassador.

Congratulations to Steve, Cammi, Rusty and Anita on behalf of all in the American Dahlia Society upon their receiving the ADS Silver Medal. 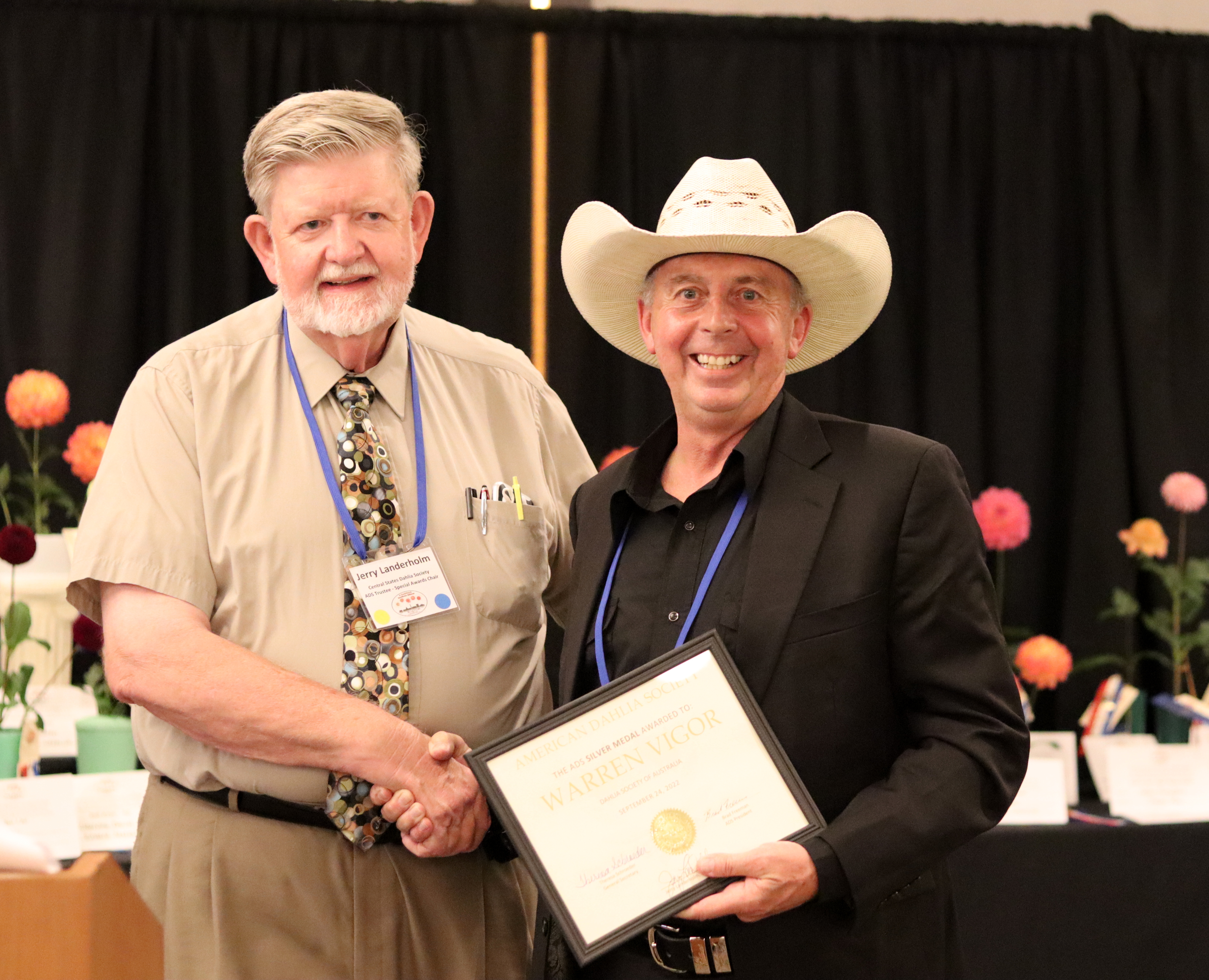 The American Dahlia Society’s Silver Medal is a significant award presented by the Society to people whom we believe have proven to be horticultural ambassadors and whom we expect will continually be proponents of the dahlia. The ADS is honored to present Silver Medal awards to following persons 2022.

Scott Aker. Scott is the Gardens Unit Supervisory Research Horticulturalist at the United States National Arboretum in Washington D.C. This position is under the auspices of the United States Department of Agriculture. Just as the dahlia has enjoyed a resurgence of popularity, we hope our flower will receive consideration from Scott and his staff. Thank you, Scott, for your involvement with horticulture and for your service to the Arboretum and our country.

June Nash. June has been a key contributor in the National Dahlia Society of the United Kingdom for many years. She is the currently the General Secretary. When the ADS communicates with the NDS concerning our medal exchange program and other business, it is June who is our point of contact. June has undoubtedly dedicated much of her life to dahlias. Her father was prominent and successful commercial dahlia man. Assuredly she knows her business when it comes to the dahlia. June typifies an ambassador for the dahlia, and we congratulate her on being awarded an ADS Silver Medal.

Ron and Brenda Thomas. Ron and Brenda have been recommended for their unusual dedication to making the National Dahlia Show of the UK a grand success for over ten years. Society members like Ron and Brenda exhibit the diligence to make major events like the annual NDS’s National Show operate smoothly. The American Dahlia Society has continually advocated for continuation of important annual shows. It is not without precedent that we recognize dahlia people like the Thomases for their support of the National Dahlia Society in the United Kingdom and for their help in sustaining these important dahlia shows.

Warren Vigor. Warren is the current president of the Dahlia Society of Australia. He is certainly a dahlia man well-traveled. Warren has become a familiar face in the U.S., visiting North America on several occasions and attending many shows and other dahlia-related events. He is active on the Internet which has made it possible for him to stay connected with many dahlia people in all parts of the world. 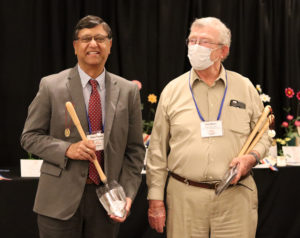 The American Dahlia Society is introducing a new award beginning in 2022. This award, the “Clean Stock Offense Award” is intended to recognize individuals and organizations that have made dedicated efforts to reduce the incidences of viruses in our dahlia gardens, both commercial and private. We are speaking about viruses that inhibit healthy dahlia growth.

There are steps, while not without complexities, which can be taken to work towards this end. These include various forms of testing, approved sterilization methodologies to prevent virus spread and simple measures such as examining plants for signs of virus and then destroying them if there is reasonable doubt. While plant viruses will always be with us, we must do our best to manage them. For sure, we must refrain from keeping suspicious dahlia stock and especially from passing this stock along to others.

The ADS wishes to recognize people who have worked within and in conjunction with our Society to identify and combat the spread of detrimental dahlia viruses. The “Clean Stock Offense Award” is initially presented to four people whom we identified as champions in this effort. There are others who are deserving, but for now it is our privilege to honor the following people: Jim Chuey, Ron Miner, Hanu Pappu, and Tony Evangelista.

Remember, “If in doubt, throw it out!” 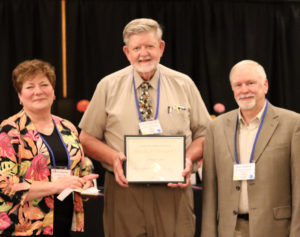 Sharon Swaney is the recipient of the American Dahlia Society’s Gold Medal in 2022. Sharon is our webmaster, and she has provided her expertise to this volunteer ADS Board position since 2016. The Society’s presence on the Internet and other forms of electronic media was immediately enhanced when Sharon agreed to be our web person. We gained a very professional look to our website, and she has continually done the fine tuning required to keep it up to date.

One of the finer aspects of Sharon’s presence has been her ability to coordinate with other ADS committees to meet their specific needs. This service spans the gamut and for fear of missing some important function, we will not enumerate. Simply put, looking at the extensive list of ADS committees you can be assured that all of them have worked with Sharon to make critical information available on the ADS website.

The ADS is fortunate to have a volunteer workforce that possesses such diverse and valuable talent. Sharon Swaney is one of these talented volunteers and she is very deserving of the ADS Gold Medal. Congratulations Sharon!