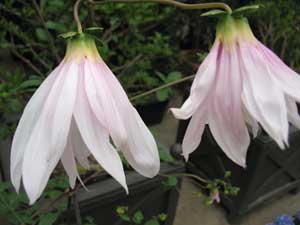 Dahlia campanulata (Weeping Tree Dahlia) is a recently discovered tree Dahlia from Oaxaca, Mexico. It is a statuesque plant reaching a height of 8 feet with beautiful pendulous bell shaped lavender flowers that are about 4 inches across. Tree Dahlias, as a group, are the giant cousin of the garden Dahlia and can reach heights of 20 feet. In the garden, tree Dahlias provide an interesting foliage effect with towering height and bamboo-like stems. If planted in the ground in colder climates, like that of Pennsylvania (zone 6), the plants will freeze before they are graced with flowers. In areas with a milder climate like San Francisco (zone 10), they will flower in the late fall and winter months. Because of its recent discovery, Dahlia campanulata is not yet available for purchase in the trade. 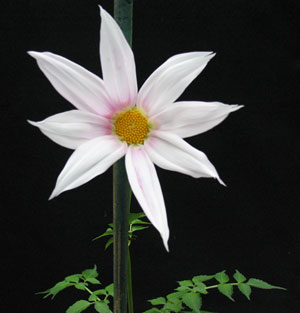 Longwood Gardens is a public display garden in Kennett Square, Pennsylvania founded by Pierre DuPont. Longwood boasts 5 acres of conservatoires that are open to the public year round. The research department at Longwood is always trialing new plants to keep the displays interesting. Dahlia campanulata was a candidate for display because of its imposing size that fit the scale of the conservatories, and beautiful flowers. The use of the plant was somewhat limited because of the winter bloom time. It was decided that it would be beneficial if the plant could be forced into bloom at other times of the year. A research project was implemented at Longwood to determine if day length was the trigger to cause Dahlia campanulata to bloom.

Cuttings of Dahlia campanulata that were 10 – 15 cm in length were taken in November and potted in 6 x 6 x 12.5 cm band pots that were filled with Sunshine mix #4 (SunGro). Cuttings were placed in a glass covered greenhouse and automatically misted each time outdoor light accumulated to 60 Wm2. Cuttings root very easily without rooting hormone. Long days were provided by two 500 W high pressure sodium lamps that operated from dusk to dawn. On January 12, 2009, eight rooted plants were repotted into 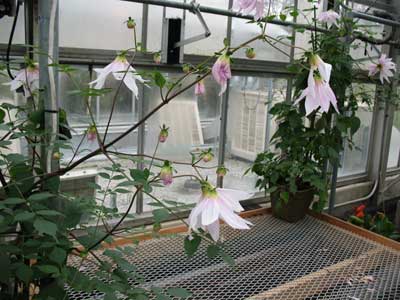 20 cm fiber pots that were filled with Fafard 3B mix (Fafard) and half of the plants were pinched. After repotting, plants were fertilized with 20-10-20 (N – P2O5 – K2O) at 200 ppm N on the weekdays and received tap water on the weekends for the length of the experiment. Two pinched and two non-pinched plants (Group 1) were placed under natural short days and the remaining six plants remained under long days. Supplemental light in the long day treatment was provided from dusk to dawn by three 100 W incandescent bulbs. On February 10, 2009 a pinched and

non-pinched plant (Group 2) were placed under natural short days. The remaining two plants (Group 3) remained under long days for the length of the experiment. Greenhouses were passively cooled when temperatures reach 22 °C and heated when temperatures fell below 18 °C during day light hours and 16 °C at night.

Non-pinched and pinched plants had at least one visible bud within 19 and 23 days, respectively after being placed under short days regardless of short day initiation date (Figure 1). Days to first open flower from visible bud averaged 16.5 and days from first flower to full bloom averaged 11.8 for all treatments. Days from initiation of short days to full bloom averaged 45 days for non-pinched plants and 51.5 days for pinched plants. Group 3 plants that were under long days for the lengths of the experiment never flowered or set bud. These results indicate Dahlia campanulata is indeed a short day plant that can easily be forced to initiate flower rapidly after exposure to short days. Days to visible bud and full bloom can be delayed 4 to 5 days by pinching.

by Matt Taylor and Alan Petravich