For this year’s Central States Dahlia Society’s show the society sponsored  a poster competition to complement their artistic design theme.  Over 200 hundred votes were cast to choose among 16 entries.  The winning poster by Larry Cole did a fun take on the Mexican holiday Day of the Dead. 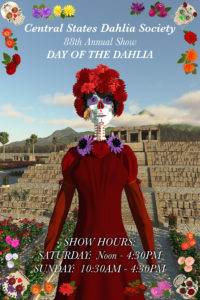 In addition to the play on the name “Day of the Dead”, the allusion to the Mexican holiday is very clever in that dahlias are the national flower of Mexico. The Aztecs grew dahlias for food and the Incas felt dahlias were so beautiful that they should only be owned by royalty.
Larry used Aztec temples and gardens of dahlias in the background as well as the skeleton lady in the foreground.
Images related to the Mexican holiday go back to 1920 when illustrator Jose Guadalupe Posada began creating impressive images for the Day of the Dead. His most famous character was the Catrina, a female skeleton with a glamorous hat.  During the 1930s, Posada and his Catrina became a Mexican icon.
Larry used Photoshop, Vue, and other programs to make the design. He even scanned dahlia stems and leaves to make the dahlias in the background accurate, even though only he would notice the difference!
We use cookies to enable function and improve your experience on this site.
Accept
Change Settings
Cookie Box Settings
Cookie Box Settings