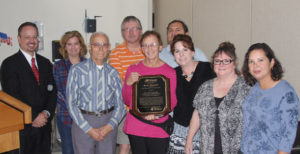 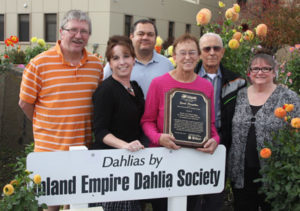 On October 13, 2015, the Spokane, Washington VA Medical Center Director, J. Ronald Johnson, presented members of the Inland Empire Dahlia Society with a plaque honoring them for 16 years of planting a dahlia display garden near the front entrance of the medical center since 2000.

The plaque honored Claudia & Dennis Biggs, the Inland Empire Dahlia society, its members and volunteers.  Claudia has been in charge of the garden since 2000, and Dennis was helping as much as he could.  He passed away in June, 2015. 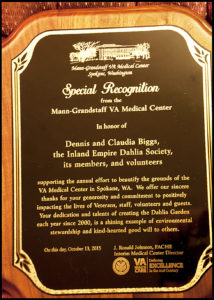 The plaque thanked them for “supporting the annual effort to beautify the grounds of the VA Medical Center in Spokane, WA.  We offer our sincere thanks for your generosity and commitment to positively impacting the lives of Veterans, staff, volunteers and guests.  Your dedication and talents of creating the  Dahlia Garden each year since 2000, is a shining example of environmental stewardship and kind-hearted goodwill to others.”