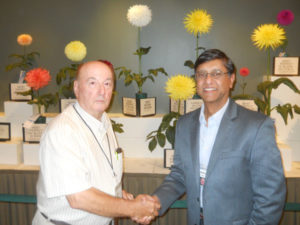 Mr. Jim Chuey announced two major developments in dahlia research and development at Washington State University (WSU) at the annual American Dahlia Society (ADS) National Show on Saturday afternoon, September 9, 2017. Through the Scheetz-Chuey Foundation and on behalf of the ADS, Jim donated $805,000 to WSU. That donation, in addition to an earlier donation by the Foundation and grants from the ADS and Evie Gullikson, serve as the basis for the creation of the Carl F. and James J. Chuey Chair for Dahlia Research and Development at WSU.

In addition, the funds will support the creation of a Dahlia Resource Center that will serve as the vehicle to translate and transfer the broad agricultural technology available at WSU to ADS dahlia growers around the world. Professor Hanu Pappu will hold the Chuey Dahlia R&D Chair and be responsible for the Resource Center. Professor Pappu spoke briefly about his plans for future work at the seminar Saturday afternoon.  Read more.