A Message from the Chairman, ADS Garden Dahlias Committee

Why Is a Senior Judge and Exhibitor Writing About Garden Dahlias?

Those who know me as a highly competitive dahlia purist would consider me the last member of ADS to be writing about garden dahlias.  However, in my 30 plus years growing dahlias, I have always included a number of dahlias that I would never expect to win in exhibition and that I grow purely for my pleasure and the enjoyment of my family.  Flower lovers who know little or nothing about dahlias love my “guilty pleasure” dahlias more than the ones that I consider worthy of competing for a court of honor. 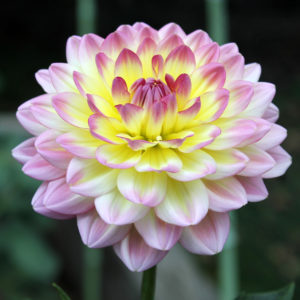 The late Steve Nowotarski campaigned the ADS Board to devote more attention to garden dahlias some years ago.  Since Steve’s untimely passing shortly before the 100th anniversary of ADS, we have not had a leader for garden dahlias.  I volunteered to share some of my thoughts and suggestions – not based on research or history, but based on personal experience and preferences.

I doubt that one would find a generally accepted definition of “garden dahlia.”  Intuitively, the term refers to dahlias that make a colorful and beautiful display in the garden (thus probably producing a high percentage of blooms to foliage and probably not growing abnormally tall).  However, one can also include exhibition dahlias grown for garden display – thus without unduly restricting the number of laterals and disbudding less than one would for exhibition. 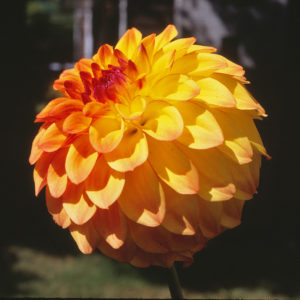 In judging dahlias, we give 28 points to form and 22 points to color.  These two criteria represent half the total possible points for judging a dahlia.  One implication of the point scale is that garden dahlias, not focusing on exhibition potential, probably lack something in form and color.  For example, a garden dahlia might have great color but poor form.  The blooms may be coarse (petals overly large for the diameter of the bloom) and may be off in ideal depth.  My mind goes to HY CLOWN, BB FD Br, an introduction some years ago of my good friend Wayne Holland.  HY CLOWN was a beautiful bronze dahlia with large petals that reflexed completely to the stem.  A good bloom of HY CLOWN was often deeper than wide – that is, the depth often exceeded the diameter.  A result of the large petals and excessive depth was that the overall shape was more that of an egg than round.  As a garden display and bloom in a vase, HY CLOWN is sensational.  On an exhibition bench, if HY CLOWN wins in competition, the reason must be very poor judging. 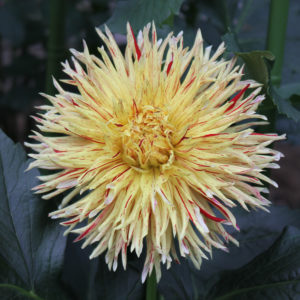 Sometimes a dahlia has excellent form but color issues.  One of my favorite garden dahlias is HOLLYHILL SIX IN ONE.  This beautiful dahlia, B LC Var R/Y/W is flashy, has nice depth, but is only lightly laciniated and has little consistency in arrangement of the colors.  Some blooms have white and others do not.  Some have portions of the bloom with solid petals.  The crazy arrangement of the colors makes this cultivar a favorite of mine to enter in People’s Choice, where visitors not associated with the dahlia show vote for their favorite entry. 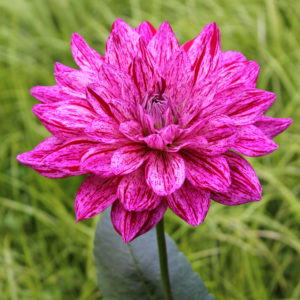 Variegated dahlias are inherently considered to be garden, rather than exhibition dahlias, because it is extremely rare to find a variegated dahlia with uniformity of color (either across a single bloom or among a set of blooms for a matching multi-bloom entry).  For years one of my favorite dahlias was POP TALK, BB ID Var Pr/L.  Unfortunately my wonderful stock reverted to all purple several years ago, and I have not been able to find new stock anywhere.  (I am considering making available my PURPLE POP TALK as a dahlia for arrangers.)  POP TALK blooms are flat, but the color is absolutely sensational.  I have won People’s Choice with Pop Talk based on the sensational color.  For anyone looking for beautiful variegated dahlias, consider Birch Bay Dahlias.  Sandy and Steve Boley have hybridized a number of beautiful variegated dahlias – any of them would be great for garden display. 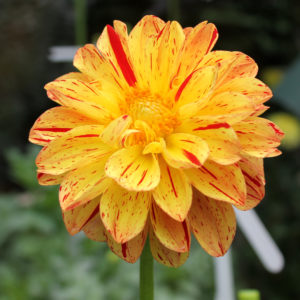 I have an interesting seedling that some of the judges in my home society hate that I am considering making available.  I call it FROG, because I won the Frog award (worst well grown seedling) at our show with this cultivar.  It has around four rows of waterlily type petals in a yellow with a pink shade near the tips of the petals and red variegation.  The first year the blooms were BB size.  More recently they have been more miniature in size.  The form perfectly meets the form definition of peony, although most of the peony cultivars that have been winning have been micro sized rather than larger such as FROG or the original peony dahlias from the 1930s.  I am convinced that FROG would not win anything in virtually any dahlia show – but there are no other variegated peony dahlias listed, and it is a beautiful dahlia for arrangements.

How Can I Grow Dahlias and Cope with Frost? 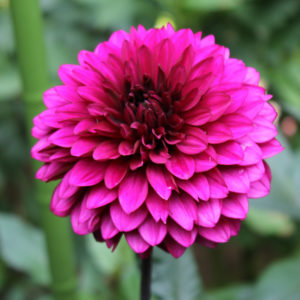 Nothing seems to scare new gardeners to dahlias more than coping with tubers.  I remember as a novice being terrified of digging tubers.  For several years, I did what I could, put away the tubers in vermiculite, reordered anything I wanted to keep, and was astonished that most of my tubers came through.  My friends who grow dahlias for garden display dig their tubers, wash them, and bring them to me to cut, mark, and store for the winter.  For others, I recommend that they treat the dahlias as annuals – re-order what you liked and try some new dahlias next year.  If tubers terrify you, don’t worry about digging them!